Cnr. Scott and Inglis Streets, Buninyong. The Gardens cover the blocks bounded by Scott, Inglis, Fisken and Yuille Streets. The Upper and Lower Gardens are separated by an embankment running along Cornish Street. 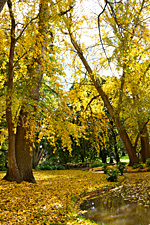 2011 was the 150th Anniversary of the Buninyong Botanic Gardens and a number of commemorative events were held throughout the year, culminating in the opening of the handsome stone wall entrance at the Corner of Scott and Cornish Streets on Saturday 13 November 2011.

Autumn is gorgeous in our Gardens, and they were featured on the ABC TV weather report in 2011 (right). The beautiful old trees also make a shady retreat over summer and there is a very pleasant walk around the Gong whatever the season.

The Tempest in the Buninyong Botanic Gardens

Eight wonderful performances of Shakespeare's much-loved comedy brought magic to the Buninyong Botanic Gardens in February 2017. Directed by Susan Pilbeam, the play was a delight from start to end, as it moved through the Gardens, from the Rotunda to the lily pond to the walled garden. Experienced actors played the lead roles, including several performing arts graduates from Federation University, sweetly supported by a flock of musical sprites and young sailors from Buninyong Primary School.

The Buninyong Botanic Gardens are among the oldest in the State. In 1859 the first Buninyong Municipal Council reserved an area of 10 acres for the Botanical Gardens. The original plan of 1861 showed walks and bridges, fencing and gates and a proposal for bathing facilities. In 1872 Conrad Fegbeitel, a German immigrant, was appointed Curator for the Gardens and Superintendent of the Baths. The famous Ferdinand Von Mueller from the Melbourne Botanical Gardens, the curators of Ballarat and Geelong Gardens, the State Nursery at Creswick and local nurserymen all donated specimens of trees and plants. Following a devastating fire in 1876, the capacity of the Gong reservoir was greatly increased in order to ensure an adequate water supply in the event of another fire.

The Main Gardens consist of an Upper and Lower Section. The Upper Gardens centre around "The Gong", a small lake which is encompassed by a walking path. The ground to the North and East rises steeply to the Roman Catholic Church of St. Peter and Pauls. On these slopes there is a scattering of introduced European trees. This area has been recently developed with specimen trees of the Maple family (Acer species).

The picturesque Lower Section of the Botanic Gardens contains an historic Victorian Rotunda, an old walled Swimming Pool (since converted to a garden area), an ornamental pool with an island, and a variety of exotic labelled specimen trees and shrubs. There are also toilets, a barbecue area and play equipment.

In 1990 the Old Sandstone Courthouse and its immediate surroundings were added to the Gardens Reserves. An area in the southwest has been excised to the Buninyong Bowling Club. 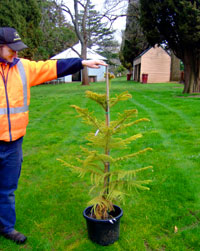 The gardens became a popular wayside stop for travellers and picnickers who came by train from Ballarat for a day's outing to admire the 'hilly picturesque countryside' and the ornamental trees and flowering shrubs. The railway era was the heyday of the Buninyong Botanical Gardens. The service ended in 1937 and the track was dismantled in 1947.

2008 tree planting in the Buninyong Botanic Gardens
A new Araucaria columnaris, or Cook Pine, was planted in the Botanic Gardens on 28 August 2008. The young tree, which is a native of New Caledonia, replaced an older one in the Gardens that died some time ago. Check out its progress amongst the other splendid mature trees next time you're in the Gardens.

Information on the history of the Gardens supplied by Beth Ritchie and Derick Leather, Buninyong & District Historical Society

Other websites with information about Buninyong's Botanic Gardens: