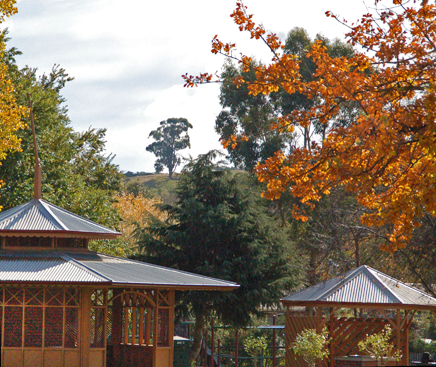 Gravel paths with gentle gradients wind amongst lawns shaded by mature trees and over small bridges crossing a small stream and ponds in Buninyong's atmospheric Lower Botanic Gardens. Facilities such as a rotunda, children's play areas, barbecues, and toilets make this restful place popular for picnics.

In the Upper Gardens, another level path skirts The Gong, with steeper tracks leading up to the Catholic Church and to Mt Innes.

A level gravel path runs through Desoza Park for about a kilometre along both sides of the Union Jack Creek. It is suitable for prams, wheelchairs and bicycles.

The eastern end of the park, next to the Information Centre, has a rotunda, children's play area, barbecues, and toilets.

A maze of bush tracks wander through the old gold mining area of the Union Jack Reserve on the north-east corner of Buninyong. The Reserve has several plaques describing points of interest, including the site of the historic Locomotive Mine Disaster in the northern section.

Safe play areas with swings and climbing equipment can be found in:

Picnic tables, chairs, barbecues and toilets are located in:

An array of sporting facilities are clustered around Forest street, between Inglis and Cornish Streets: